Remember what you said when you first saw Google Earth and Google Maps, you might have thought they were great to have as a utility. Especially due to the fact that they were updated more often then other options available at the time. Then Google Earth added a 3-D layer to the program that gave you additional features as well as the ability to create points of interest, etc. Then a little over a year ago Google Maps added its Street View option and many people thought that was a great feature while others immediately thought it was creepy.

There is more out there now and it is coming from the Georgia Institute of Technology. Students and faculty there have been able to design and adapt CCTV feeds into animated 3-D representations within the software. Now you will be able to see how heavy traffic is on the highway before you leave the office. Or you could see how many people walk through Central Park on any given day. You could even watch a football game or keep an eye on your child while they are playing in the park down the street.

Oh yes, the "creep factor" red light is going off with loud booming sirens on this one. But hey we live in a voyeuristic world where we have made TV history for highest ratings for shows like "Big Brother" and "Survivor." But I digress...

The official release will not be unveiled at the International Symposium on Mixed and Augmented Reality(ISMAR) in Orlando, Fla. which is held Oct 19-22. Take a look at the video below to get a quick sample of what their new technology.

Video provided by Ga. Institute of Technology
Posted by eherreid at 10:10 AM No comments:

Einstruction offers a new feature if you are using both their Classroom Performance System (CPS) and Mobi Interactive Tablet. 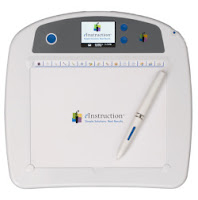 Einstruction offers a 2 inch KWIK view screen on their Mobi that allows you to seamlessly integrate your CPS data. As students answer questions on the response clickers the data is transmitted and displayed on the Mobi KWIK screen.


You want to make sure that the KWIK Tab settings

are correct inside the CPS software. In the CPS software click on Settings on the tool bar and then Delivery Options. Click on the KWIK Tab and make sure that all of the selection boxes are checked. 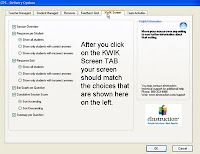 After you have all the settings correct you engage a question session normally then on the Mobi tablet select the Clicker Softkey (third from the Left) and you will now see the data in the KWIK screen. 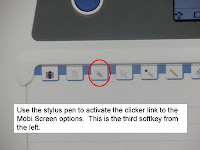 Posted by eherreid at 8:35 PM No comments:

Did U Know: Document Cameras

So far we have discussed some differences between Document Cameras (doc cams) and overhead, that they can take pictures like a digital camera and that they can record video like a camcorder. So what else is there to do with a document camera you may ask?
Both the AverVision and Queue software offer a(n) annotation feature that allows you to draw over your projected information, be it print, image or object. So lets take a look at what each software has to offer.

The Queue software from Lumens offers access to its Annotation tools from the link in the toolbar on the right side of the window.

You have 11 options available to you: The Pointer tool, Laser Pointer Tool, Pencil Tool, Text Tool, Draw Line, Draw Ellipse, Draw Rectangle, Eraser Tool, Clear All, Color Choice blocks and Line/Text size adjustment. You want to make sure however that you go back and select the Pointer Tool before you close the Annotation Tools because it keeps the last selected option in memory. So if you have selected the Pencil Tool and you close the Tool box you will still be drawing with the pencil when you click on the screen.

The AverVision software from AverMedia offers direct access to the Annotation tools from the main toolbar. The entire bottom half of the toolbar are your annotation tools.

There are seven options on the toolbar and some that will offer an additional pop-out menu of other available options. Freehand Drawing, Insert Line, Insert Rectangle, Insert Ellipse, Insert Text, Select & Paste and Eraser. If you choose the option of freehand drawing you will have an additional menu of choices like, thickness, color and style.
Both software applications offer you many different ways to identify, create, write, spotlight and make your projected images stand out so that they are out of the ordinary and unique.

Images provided by: AverMedia & Lumens
Posted by eherreid at 9:00 AM No comments:

Now I am all up for new and innovative ways to communicate but ####!!!

I read this article from techradar.com from this past weekend where two children were trapped in a storm drain in South Australia and rather than call "000", their version of 911 they updated their Facebook status to tell people what was going on.

The children, ages 10 and 12, were probably out being kids when they got in trouble. I am also probably sure that somewhere along the way their parents, relatives, school teachers, etc.. told them that if they were in trouble to call "000" to talk emergency services, not update their status on Facebook. IF this does not raise an eyebrow with you, parents and everyone else out there someone is living under a rock.

Now I believe in technology and work with it everyday to try to help people to better integrate it into their lives but this may have gone to far. It took more time to update Facebook than it would have for the children to call emergency services. We live in an ever changing society that offers our children technological advances that we as adults over the age of 30 never had growing up. But we still have to instill in our children, and I bet their parents did that afternoon, there are certain things you do when you are in an emergency situation... and it is not to update your Facebook status.

Some of you may be angry at the statements but as the MFS (Metropolitan Fire Service )spokesperson said "If they were able to access Facebook from their mobile phones, they could have called 000, so the point being they could have called us directly and we could have got there quicker than relying on someone being online and replying to them and eventually having to call us via 000 anyway."
Posted by eherreid at 9:38 AM No comments: