School News: Drum Up Some Business 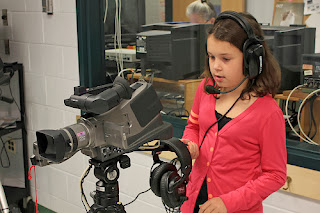 Let’s see, equipment… check, location… check, now that you have these things setup what’s next?  Hmm… oh yeah I need some backing to make sure that the School News is a success.

Me, I’m always one to get permission first rather than ask for forgiveness later.  So I would first talk to your school Principal about this new opportunity at the school to help students with literacy, vocabulary, reading, digital-citizenship, self-confidence and presentation skills.  How do throwing out these words help?  That is exactly what having a school news show will do for the students that are a part of the program!  Even for students that already seem to have a good grasp on vocabulary and reading can be challenged because of the presentation component.
It’s a challenge for you as well being the teacher that has decided to take on this role, as the “Trailblazer” at your school.  If you get the ok from the Principal it is now time to get the ok from the other teachers.  Here is when having a ready to go sample broadcast where you are in front of the camera to show comes in handy.  They will get to see how you react in front of the camera, consider their student reactions and then make a decision.  You could even show the sample broadcast school-wide to students to get their reactions and interest level.  In the schools that I have seen this done the students excited about the prospect of being on the school news cast.

With that being said now you have to figure out the process to get your students working with you on the news.  I have a few steps that seem to have worked in the past and will share them here.  By all means this is not the end all be all and you may have additional steps or comments about the process, I encourage you to leave me comments at the bottom of the article.

Step 2:  Application Process
Yes I said application.  You want to have an application that students will fill out just as they would for a job.  This will give them some real world experience for life after school.  How you create the application is up to you but some things to consider including as well as the job description is a discipline policy that covers actions in and out of the classroom.  This would also outline dismissal from the broadcast team for student

infractions.  A photo release that needs to be signed by a parent or guardian. You will also want to make sure that you have writing samples from each student and notify them that they will have to complete an on camera live audition using their own material.  During this process it seems that as students want to get involved others that were on the fence come out of the wood work to apply and you tend to have far more than you could ever use.  But the great thing for this is that you will have a steady stream of backups should something happen.  If you have enough interest you could set up a rotation with multiple groups of students.

Once you have all of your applications in and have selected your team now it is time to get the magic started!

Step 3:  Putting the Pieces together
Now that you have identified the students who will be a part of the broadcast team it’s time to get things started.
Production Team Training: Even though you have assigned everyone to their positions it would probably be best to train everyone on how to use the equipment just in case someone is not there.  The reason for this is that at some point you want this to become self-sufficient where the student have total control of the news show.
Writers:  You want to give your writers a standard script that they need to follow but that they can update and change daily.  That also have to be turned in ahead of time for review and rewrite if necessary.  Here are some standard items you can put in the script.
Daily Announcements, Birthdays, Lunch menu, Weather, Upcoming Events and Recognitions (students & teachers).  Many of these things can be done a couple of days ahead especially things like birthdays, menu and weather.  This can make things easier for students to turn in.  Also you can allow the students to research other things to put in the script.  Items like a word, joke or quote of the day, an interesting fact, something that happened in history on this date.

Anchors: The face of your newscast that can make or break the success of the broadcast.  Something that your anchors need to understand is that they need to be dressed appropriately each and every day that they are on the air.  They are representing the entire school whether or not they are on the air or not.  There are more Do’s and Don’ts for this group than the others because of being in front of the camera.  Practice is also a key component, ask them to go over the script in front of you.  Encourage them to practice at home, in front of a mirror or with others on the broadcast team.  This will help them to get over some of the jitters of being in front of the camera and help steady their speech and nervous tendencies.

Just having these few things setup prior to jumping into the deep end will prevent a lot of problems down the road and make your School News a success.