My First Look at the Lumens DC190 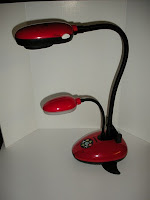 Finally I have recently gotten to really sit down and take a look at the new (well almost new) Lumens DC 190 document camera(doc cam) that has recently replaced the DC 166 that hit is EOL cycle.We have been using the DC 166 model for a couple of years in our school district and will now be transitioning over to the newer design model. 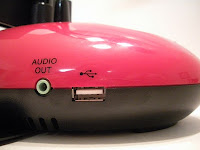 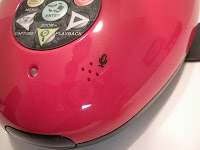 At first glance you do not see anything different in the look and design of the doc cam, it is their termed "Ladibug" design series.  Upon further inspection there are two noticeable items that are different in this design over earlier versions.  One is that there is a USB plug-in  instead of the SanDisk port of the earlier 166 model.  The other difference is that there is a microphone built in the front of the base now so that you can include sound with your video recordings in the camera only(presenter) mode. 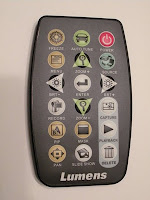 Another big change in the DC 190 over its predecessors is the redesign of the remote control.  Now you still have the standard buttons on the base of the doc cam; Capture, Playback, Zoom +/-, Power and Menu.  However there is a new look to the remote.  They have gone back to the basic black color design, which is great for those who are color blind (like me) because it makes the buttons and names stand out.  There are a couple of changes on the remote control that need to be mentioned so that you know where to look now versus earlier models.  The Source button is now located below the Power button, a big departure from having it in the top left which is now the Freeze button.  The Menu button flips over to the opposite side of its current row.  The Book button has now been replaced by Pan, which is a more appropriate name to describe the action that is associated with the buttons actions.  It still works the same way, you press it once to get into the Pan mode and then again to exit.  A huge step ahead of it previous version is what use to be the PBP button which is now PIP.  Yes it should sound familiar because it is Picture in Picture.  You have the live image in the background and then the static image in the bottom corner that you can choose from by using the selector (arrow) buttons to view the available images.  There is a new edition to the remote and that is the Mask button which similar to how you placed a piece of paper over your old overheads.  About 3/4 of the screen is darkened out on the first click, the second then puts a veil over the whole page except for a square in the middle of the screen.  You can then use the arrow keys to move the square around on the screen similar to a spotlight feature or move to reveal. 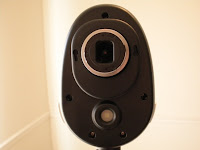 Another nice feature of the DC 190 is that there is now an LED light that is under the Head unit.  Now depending on the ambient room light you only had the option to either have the light source on or off.  Now you can select the LED light so that you still have an additional light source that is not as bright as the normal lamp light that has been on the Ladibug design for years.  The LED light source is just below the lens unit when you raise the head up at straight.  You can toggle between the modes using the Lamp option button in the Ladibug software.

Stay tuned for part 2 of my look at the Lumens DC 190 where I will go into the Software changes and then give you a break down of the good and bad that I have seen in the new design.