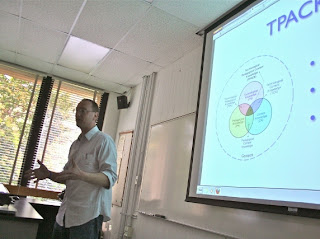 This past weekend I was able to attend my first Edcamp in Raleigh, North Carolina.  I was not sure what to expect and really did not know how things were going to work since I was told that there was no agenda.  No agenda I thought to myself, how will I know what I want to do and where I am supposed to be throughout the day.  If you do not know me, and my co-workers and friends can tell you, I am a very strict timeline follower.  I am used to doing thing according to a schedule and when that is disrupted I am not one that can appreciate the change rather quickly.

I was told that there was no solid agenda with no specific content to be covered or topics to be discussed.  It was up to the participants to choose what was going to be discussed.  Choose, I said, what do you mean.  Well how things work is that there is an "Idea Wall" where anyone attending the Edcamp could come up and write down a topic of discussion that they felt passionate enough about that they wanted to have a session dedicated to it.  Then hopefully you will have enough topics to cover through the entire day with enough diversity so that people have lots of choices to pick from.  So I figured why not, so I threw a topic up on the wall for a session time.  I was not sure if anyone would even show up but that is also the catch at an Edcamp.  You may have a session that everyone wants to come to and you may have one that is not attended at all, and it is all OK.  You may have people coming in and leaving during your sessions and that is OK as well.  There are no hurt feelings and the opinions of everyone are valued and not squashed.

I was prepared for the worst case scenario being that no one would attend my session.  I just was not sure that there would be any interest and I since this was my first Edcamp I would have been fine with no one attending.  But when the time came I was surprised that I had some people walk in to participate and the game was on.  I felt that it was a really good session with lots of discussions in it and I even got a round of applause from the few people that were there.  All in all it was a great day and I feel that I will attend more in the future and even sign up on the "Idea Wall" to present a session again.

I have a confession to share with you know.  I can now say that at one point in time I was very concerned and unsure of myself as a presenter.  Now I can say that after presenting at a number of conferences I am feeling more and more comfortable with being in front of people.


Image provided by: @bethanyvsmith, NCSU
Posted by eherreid at 3:49 PM